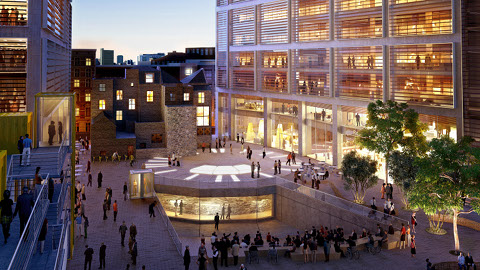 A 40-storey development is to be built on the historic site of Shakespeare’s Curtain Theatre in Shoreditch. The theatre pre-dates The Globe and was home to the premiere of Romeo and Juliet.

The development has raised concern in the area as its 40 floor tower will be much higher than surrounding buildings.

Plough Yard Developments, who own the site, submitted the planning application to Hackney council in December of last year and comments closed for the application this week. 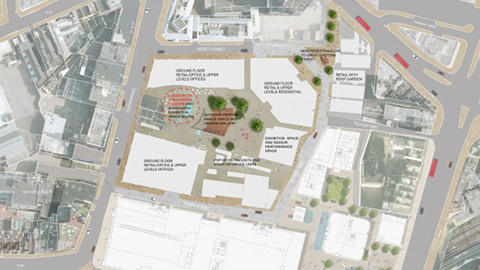 A representative from Pringle Brandon Perkins + Will, the architecture firm involved in the development plans, spoke exclusively to ELL about the details of their proposal. If approved, excavation would continue on the “best preserved Elizabethan theatre ever found.”Above ground, the plans include an outline of the exact layout of the theatre. But members of the public will have the opportunity to go three metres underground to see the actual historic remains as well as visit an exhibition centre.  The centre will be in collaboration with the Museum of London Archaeology (MoLA), who, in June of last year, uncovered the first two sections of the exterior wall of the theatre.The preserved theatre site will be the focal point of the intended courtyard, a public outdoor area taking up over an acre of land and containing “trees featured in Shakespeare plays.”Informal performances of Shakespeare’s plays will take place in the open-air space, while a pavilion building will be designated for more fully-fledged productions of the Bard’s catalogue. The theatre programme will have an emphasis on community and school outreach.

The architects believe that this is the best way to preserve the site: “We’re absolutely trying to do the right thing.

“This is likely going to be the number one tourist attraction in Hackney.”

But not everyone in the local community is pleased with the proposal.

Matt Johnson, a spokesman for South Shoreditch Community Association, said that the association “strongly objects” to the application and urges the council to reject the proposal.

He added: “It is a grotesque over-development, completely out of scale with the neighbouring streets of South Shoreditch.

“It will cast a massive shadow across South Shoreditch and set an alarming precedent that could accelerate the unnecessary destruction of much of this historic, vibrant, successful and much-loved quarter of London.”

The proposed development, coined The Stage, will be centred on the recovered theatre, but with an additional focus on bringing more businesses and retail to the area. The firm expressed a desire to attract local, “unique individual” vendors to the site rather than the usual chains.

Benjamin Davies of Independent Shoreditch (Shoreditch Business Alliance), a non-profit promoting and supporting local business, said: “There is huge demand for businesses and start-ups looking to locate here in Shoreditch, all the media attention and demand means competition for space is high.

“Businesses really need there to be more commercial space available otherwise some businesses will sadly be priced out of the area.”

Mark Zakian, a Dalston resident who is a history guide and guest lecturer on Shakespeare at the National Portrait Gallery, said he is not opposed to the plans or to “good quality residential development.” He added: “the planning permission must lock in the finance and structure to preserve the historic site.”

He also said that the borough had even more “potential for historic conservation and tourist development” with three identified sites associated with Shakespeare in the area: The Theatre (off Curtain Road in Shoreditch), The Curtain Theatre, and St. Leonard’s Church.

The English Heritage gave a statement regarding their involvement with the proposed development: “We have worked with the applicants and the council at the pre-application stage for this project, and continue to work with them discussing particular considerations such as the archaeological importance of the site. We look forward to continuing to assist the project’s successful progression.”

A decision on the proposal is anticipated in late spring to early summer. If approved, there is a three to five year timeline expected on the project.