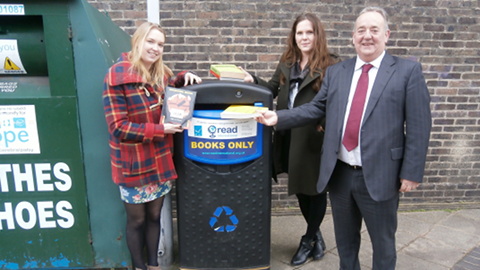 A scheme to place book recycling points across Tower Hamlets is set to launch amid controversy over a sponsoring party’s involvement in infrastructure projects in Palestine.

The recycling bins will soon appear across the borough, thanks to a partnership between Tower Hamlets Council, Veolia and READ International, a charity focused on improving education in East Africa.

The student-led initiative launched on January 31 and aims to encourage residents to donate books to be used to teach English in  disadvantaged schools in Tanzania.

Books that are not suitable or relevant to the schools’ educational programs will be sold online to cover shipping costs , given to other charity or recycled.

Sabrina Sallis, READ International’s interim Chief Executive, said: “The opportunity for us to collect more books essentially means we can change more young people’s lives in Tanzania through the provision of vital education resources. The scheme is win-win. Not only does it reduce landfill and promote recycling. But also provides books and funding to support our work in Tanzania.”

READ International’s partnership with Veolia, a multinational waste management company began three years ago with projects in the City of Westminster, Lambeth and Kingston-upon-Thames.

Chris Hodges, Veolia’s contract manager in Tower Hamlets, said: “We have seen how successful the scheme has been in other parts of London and we are determined to replicate that success here, so we can encourage residents to make good use of the book bins and help make a difference to children in East Africa.”

However, Veolia has recently been criticised by campaigners in London, Leeds and Cambridge for its participation in infrastructure projects for illegal settlements in the occupied territories of Palestine.

The NO2Veolia Action Group protested against Veolia’s participation in the bid for the North London Waste Authority waste processing contract in November and the company withdrew its bid in December.

Yael Kahn, chair of NO2Veolia Action Group said to ELL this week: “Being associated with recycling bins for books would no doubt help Veolia’s desperate need to improve its image in London. This is especially after the United Nations Special Rapporteur on the situation of human rights in the Palestinian territories occupied since 1967 urged councillors in north London to refuse the contract to Veolia.”

“The stakes are high in Tower Hamlets, where Veolia does have a few contracts. Though their financial value is relatively low, Veolia is facing a potential difficulty in retaining them because of a motion passed in February 2011, calling on the council to review all contracts with Veolia, not to place any more contracts with the company and to terminate any relationship with Veolia.”

EastLondonLines has verified that this motion was passed but has been unable to get a comment from the council.

Dan Lester, Communications Manager of Veolia Environmental Services, said to ELL: “We have not seen any opposition to the scheme previously and see no reason why anyone would object to us aiding a charity’s worthy cause to provide books to schoolchildren in deprived African communities.”

“The scheme is run by READ International and we simply facilitate the collection of books by collecting them from the dedicated bins placed around each borough the scheme operates in as an added value extension to the recycling and waste management contracts we already hold with the participating local authorities.”

“We work closely with and actively support numerous charities and community groups within the 100 local authorities we have contracts with in the UK and rarely if ever encounter any opposition to the work we do with all of these organisations either.”

“In response to suggestions from Kahn that the books might not actually be sent to East Africa Lester said:  “Quite simply, every single book deposited these book bins goes directly to READ International who have full control over them.”

The partnership between READ and Veolia,  started three years ago in the City of Westminster, and then expanded to Lambeth and Kingston-upon-Thames.

Chris Hodges, Veolia’s contract manager in Tower Hamlets, said: “We are always keen to work with local community groups and charities, especially where the benefits are so clear to see, as they are with this partnership.  We have seen how successful the scheme has been in other parts of London and we are determined to replicate that success here, so we encourage residents to make good use of the book bins and help make a difference to children in East Africa.”

The book recycling points are situated at the following locations: