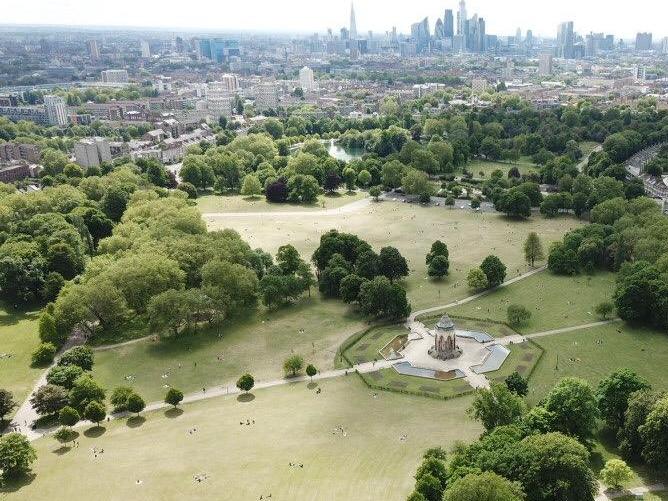 Since the start of the pandemic, parks have played a very important role in the community.

Unlike the Royal parks, Victoria Park which sits on the borders of Hackney and Tower Hamlets was the first public park built in London in response to public demand, after 30,000 local residents signed a petition to Queen Victoria over growing concerns about public health and the lack of clean spaces for locals.

Opened in 1845, today it is still the largest and most popular park in East London.

That’s why winning the 2021 People’s Choice Award for the nations’ favourite park, voted for by 32,000 people, was no surprise to park manager Dave Himes. Victoria Park is currently the only London park to win the award,,.

“Many people say, ‘How can Victoria Park win when you’ve got all the Royal Parks?’, but I think it’s just so well-known and so well-loved,” Himes told Eastlondonlines.

The People’s Choice Awards is run as a part of the Green Flag Award scheme, an international accreditation given to publicly accessible parks and green spaces.

Himes has worked for Tower Hamlets Parks for over four decades and Victoria Park for almost 15 of those years. However, Himes says most people have a skewed perspective of his job.

“People’s interpretation of my role is sitting in a deck chair at the park and watching leaves for hours. I would love to have that job. But it’s not all nice.”

“When it comes to Victoria Park, it’s like the cyclists, joggers, dog walkers, skateboarders, they’ve all got their own use and it’s my job to make sure they’re all using it harmoniously.”

‘Everyone’s got their perception of what they want to use the park for, and they don’t really consider other people’s considerations and uses.” Himes says most people are respectful, but it can be difficult to cater to everyone.

Throughout the year, Victoria Park is used to host many events, from large concerts to small scale community led festivals, but during the pandemic the park became the community’s religious center, garden, social space, and escape all in one.

While other businesses saw a loss of customers during Covid, parks saw an influx of visitors. “We were the only place anyone could go,” Himes said.

Located in the middle of some of the most densely populated housing parts of London, Victoria Park has been particularly important for families in the area during lockdown.

“There’s so much social housing in Victoria Park and most haven’t got a garden, so we are really their back gardens and I think that’s why we get so much usage.”

After earning an Advanced Technical Diploma in Horticulture at Capel Manor College, Himes began his career over 40 years ago as gardener for the council, but progressing to the role of Park Manager was never a part of his plans.

“I’m passionate about what I do, but I’ve never been overly ambitious,” Himes said.“I’m not being big headed when I say this, but I’ve almost got pushed up the ladder rather than trying to climb it.”

A born and bred East Londoner, Himes says he remembers enjoying the park with his mates as a young kid.

“I think from the age of 11 we used to get on the 277 bus and frequently visit. It was about a 10 minute bus journey away, so I’ve known it basically all my life.”

With such a long history at the park Himes has witnessed major changes, namely the pandemic. Despite the influx in visitors due to the closure of other businesses, Himes said there were also times when the park was incredibly empty.

“It’s a beautiful sunny day and I was walking through the park and it was so strange, so surreal to see no one in the park.”

“I walked through the playgrounds and there was a fox lying on the roundabout sunbathing and that would never have happened on an ordinary day, because it would be covered with kids.

“I’ve never ever experienced the park in my life where the People’s Park has no people in it.”

Now that parks are back open, Himes can enjoy some semblance of normalcy. When looking to the future, Himes sees himself still working at the park, but says he wouldn’t mind a new adventure.

“I love it there at Victoria Park, but then I’d love to get my own little garden center somewhere, selling plants, you know, just pouring around, something like that.”